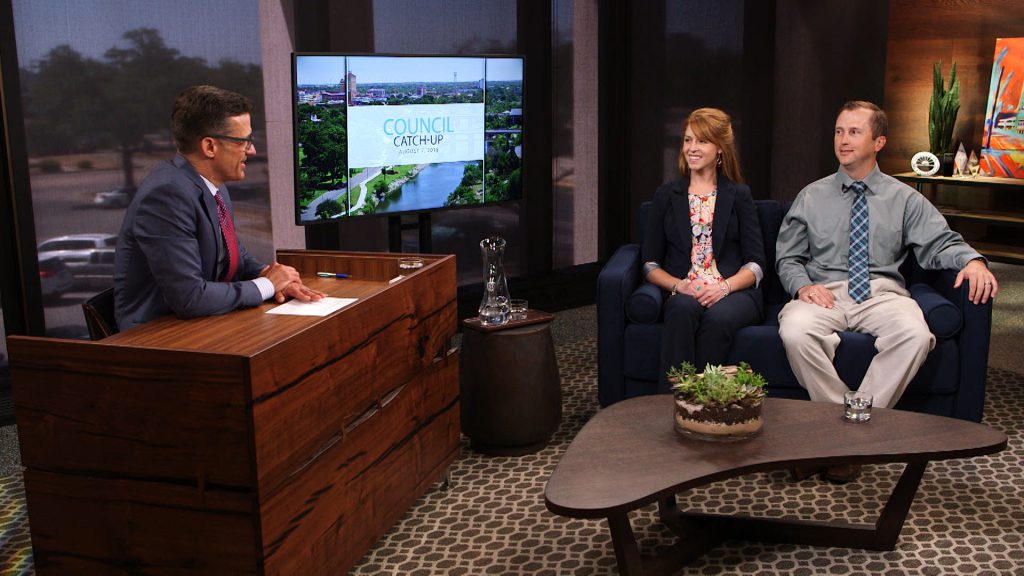 “Hey, aren’t you the guy I saw on TV?” Surprisingly, that’s a question that Anthony Wilson—communications director for the City of San Angelo, Texas—gets asked a lot at supermarkets, restaurants, the gym, and other places around town.

While you might think he’s an on-air personality for the local TV station, he’s actually the “face” of San Angelo Television (SATV), the city government’s local access TV channel. Besides broadcasting on Suddenlink cable channel 17, SATV also distributes its videos via Facebook, YouTube, and the City’s website, cosatx.us. SATV’s mission is to keep San Angelo citizens informed about what their local government is doing for them.

“We pride ourselves on producing the best video in this region,” said Groves. “Today’s video can’t just have substance, it also has to be a high-end product that really impresses viewers.”

Despite the fact that their videos compete against those produced by regional ad agencies, production companies, and network TV affiliates, the SATV team has won 50 to 60 awards since 2013—the year Wilson joined the City’s Public Information Office, which produces SATV. Many of their awards have been for video production, including Groves’ Lone Star EMMY Award for the short film “Shattered Dreams” in 2017.

“The more people understand what our municipal government is doing, as well as how and why we’re doing the things we do, the more supportive they are. And, in this day in age, the best way for us to communicate with them is via video that’s accessible from multiple platforms,” Wilson said.

Behind the scenes, Groves serves as a one-man-band shooting, directing, and producing the shows largely because of the versatility of their new studio space, and the NewTek TriCaster TC1 live production switcher in the adjacent control room.

While many U.S. PEG (public, education, and government) and public access stations struggle to make-do with SD cameras and sub-par production gear due to tight budgets, SATV was able to hire Nelco Media and acquire the HD video gear by using their “PEG dollars.” The local cable provider, Suddenlink, collects this fee that subscribers pay and gives it to the City of San Angelo to fund community media television.

“Since PEG dollars can only be used to cover A/V equipment, but not staff or freelance workers, that was another reason why the workflow had to be extremely efficient and ergonomic for a single employee to operate,” Nelson added. And to ensure that the PEG dollars would be spent wisely, Wilson embarked on an arduous, time-consuming Request for Proposal (RFP) process to solicit and evaluate prospective equipment vendors’ bids. The City Attorney’s office also helped him draft and review numerous contracts.

The final equipment package included: the TriCaster TC1, a LiveU 200, an Allen & Heath digital audio mixer, an assortment of studio and lavelier mics, six Canon C100 digital cameras, as well as a Kessler Crane camera jib and sliding crane motion control system that can be set-up and operated using an iPad.

According to Nelson, “The motion control slider enables Brian to have a dynamic shot where the camera slides back and forth across the studio without any need for a dedicated camera operator. And the jib lets him capture interesting angles of the studio, such as, downward views from the lighting grid.”

Wilson and Groves are both extremely pleased with their new 30 by 20-foot studio space, which they renovated on the second floor of a city-owned building in an ideal location.

After covering one of their many city council meetings—which SATV simultaneously broadcasts and streams live—Wilson can invite one of the city officials back to their studio to recap the highlights of that meeting and more fully discuss the importance of key agenda items.

According to Groves, the studio lights and cameras are set up and the production is ready to roll with just a few button-clicks on the TriCaster’s control panel. While having a great studio and production switcher is not extraordinary for most broadcast stations, it’s a total game changer for this community media operation. To understand how their workflow has been revolutionized, let’s consider how life used to be before this upgrade.

“Every time we wanted to shoot an interview, we first had to find an available location, such as a conference room or the back of council chambers. We’d then have to lug two or three cameras, a lighting kit, backdrops, microphones and other stuff to that site, and spend three hours setting it all up and testing it,” Groves recalled. “To make matters worse, many segments we wanted to shoot only took about 10 minutes, and then we’d spend more time taking it all down, rolling up the cables, packing it away, and putting it back into storage.”

With the efficiency of this new studio and the TriCaster TC1, their productivity has increased dramatically, and as Groves puts it, “The TriCaster is a fantastic system that has made life easier. We just turn on a few switches, roll our program open, switch the cameras, roll the B-roll, roll titles, whatever we want our show to feature.” During production, the switcher takes care of outputting the live show for broadcast while simultaneously streaming it to a designated social media site.

With only a half-day’s training by Nelco Media, Groves says the TC1 control panel was fairly easy to learn and intuitive enough for a single operator to manage every aspect of a live show with confidence. Whenever he’s had any question or concern about operating the switcher, both NewTek and Nelco have responded swiftly with whatever help he’s needed.

Telling the Story from Every Angle

In the workflow designed by Philip Nelson and Nelco’s Chief Engineer Rob Chickering, the TriCaster is directly fed by four of the six HD/SDI Canon C100 studio cameras. The two additional C100s are connected to a BirdDog converter that converts the HD/SDI signal into the NDI IP-based network protocol for NDI input into the TriCaster.

Three of these cameras are on tripods, one is on the cine slider, one is on the jib, and the remaining camera is attached to a pole mounted near the ceiling for a wide shot. Prior to the show, Groves positions each of the cameras and then switches them using the TriCaster control panel while watching the studio through the control room window.

Live graphics, including title graphics and lower third supers, are created in After Effects. Each graphical element is then imported into the TriCaster as a video clip along with its alpha channel. Brian can then roll them back from the TriCaster’s internal DDR as a downstream key overlay.

Groves has tested TriCaster’s virtual set capabilities and has been impressed with the results, but they haven’t used that feature yet. Future plans include occasionally using a virtual set, likely based upon virtual set designs that come with the TC1.

The large, new studio space was designed to convey a unique sense of San Angelo, including paintings by local artists. The decor is continually reconfigured with different furniture, such as desks, couches, arm chairs, and coffee tables, to fit the mood of each show.

The overhead lighting grid, installed by Nelco Media, supports a mix of conventional spotlights and accent lights, as well as Lightpanels Astra, Flolight Bladelights and other Mega Lite LED fixtures. The lighting design was not intended to be changed once the grid was set up. Nelco Media’s Lighting Designer Lowry Perry conducted numerous lighting tests to ensure the right amount of illumination, given that the studio has many floor to ceiling windows. This natural light, which pours in and changes from day to night, needed to be filtered, while minimizing lighting reflections on the glass.

Lowry said, “We placed a special solar screen in front of the windows to cut down the light coming in. We chose a screen that did not have a pattern that could cause a moire effect when the cameras aimed at them. The screens roll down for production, and then roll back up when they want to have natural light coming in again.”

Shooting in the field is also much easier than before. Groves puts one of the C100s on a Movi Pro Stabilizer that allows him to move unobtrusively around the action while recording the video onto the camera’s media. This remote field capability gives them a greater, more visible presence in the community.

Never Lose Sight of the Mission

As a government entity, Wilson said that it was important for the City to tell its own story and to disseminate official information quickly via its own channels. The City’s Facebook page is also a valuable conduit that conveys comments and suggestions from over 29,000 unique followers. This feedback is used to raise the bar on future videos and shows and deliver programming that keeps viewers engaged.

In deciding which stories to cover on the channel, Wilson said, “We first ask ourselves, ‘Is it interesting? Is it of importance? and/or, Is it of impact’ to our citizens?”

If this three-pronged test isn’t met, we decline those opportunities in favor of stories that do support our objective—to enlighten our community about what our city government is doing, how we’re doing it, and why we’re doing it.”